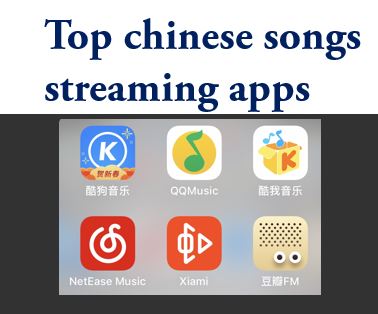 KuGou Music revealed to be holding the most active listeners among all the chinese songs streaming applications! It is believed that there are 296.5 millions monthly active listeners in the year of 2020. It’s karaoke streaming service contributed in attracting users as they will receive “song coins” and the coins are able to be converted to real currency. Other than that, users are able to comment on the songs freely and it will appear as “bullet screens” (弹幕) to watch and interact with other users.

QQ Music is one of the music streaming platforms owned by Tencent which includes KuGou Music and Kuwo Player. It has 238.78 million monthly users which leads to the second highest in China. It shared the same services as KuGou and Kuwo which are KTV, videos, radio and live streaming. Wechat users are also allowed to buy concert tickets and labeled songs through the payment system which further attracts crowds to use this music app.However, it has banned international users as the majority of them used it as a way to bypass paid streaming music apps like Spotify and Apple Music.

Unlike KuGou, KuWo put it’s main focus on Karaoke streaming to attract more users. It holds Karaoke streaming tournaments with cash rewards, screens and streams popular comedies and talent shows. It has 125 millions monthly active listeners in the year of 2020 which is top 3 in China.

In addition, it provides different types of subscriptions plans for users and songs purchased service like other tencent’s music streaming apps.

NatEase Cloud Music, owned by Natease,INC is one of the biggest competitors to Tencent’s music streaming platforms. It has 82.33 million active users which leads to the top 4 music streaming applications across China. It has a strong emphasis on the indie artists that makes it stand out among the others. It launches RunFM for joggers that selects music based on the beats per minute (BPM) that matches with the jogger’s running tempo. Besides that, it has podcasts, videos and social features to interact with performers.

Migu Music developed in recent years by Migu Technology has gained more and more active users through it’s multi-functioned music application. It has 25.29 millions of monthly active listeners and has collaborated with 1600 international music companies to broaden their business. Other than music streaming, the company has launched bluetooth speakers and mics that have Migu Music software in it to provide more entertainment for users.